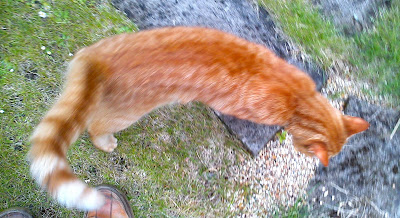 Even though I didn't think I did, I probably did drink a little too much of the hard stuff last night. A polite family invasion meant the preparation of a couple of currys based on the "1000 things to do with a chutney lake" recipe model, this worked well and then morphed into recreational time spent in the damp but strangely warm environs of the garden, a place where green things sprout at a surprising speed. While out there stumbling around I may have drunk a little more, I can't recall how much. Meanwhile the neighbours had cut down a huge ivy clump and in the process discovered a secret room filled with...I was hoping that it would be the Devil, a bear and Harlequin seated at a table and playing cards until doomsday but it turned out to be junk and pieces of wood. Secret room discoveries are always disappointing unless occurring in fast moving Enid Blyton stories. They also found a telegraph pole apparently (not in the room), the pole may come in handy. As night fell, as it invariably does we went indoors and watched more Glastonbree nonsense, ate a selection of cheeses and I must have drank a little more. Some time later, when the time begins with zeros and not actual numbers, I fell asleep.
When I awoke the grandchildren were watching "Elf" on TV, I was sandwiched between two sleeping cats and daylight was all around. Blinking a little more than usual I decided then to explore the downstairs toilet only to find that I was sharing that hallowed space with an angry wasp (are there other kinds?). Then the sweet music off Radio 6 and non-news of Radio Scotland came to my rescue and I fried four eggs without breaking a single yolk, that's twice I've done that in my entire life - I was cheered up no end by this simple achievement. Meanwhile in the lounge Ali was teaching the kids how to play Monopoly, it was 0830 on a Sunday morning. Next: Edinburgh Airport via the Highland Show traffic, joy.
Posted by impossible songs at 11:57 AM
Email ThisBlogThis!Share to TwitterShare to FacebookShare to Pinterest