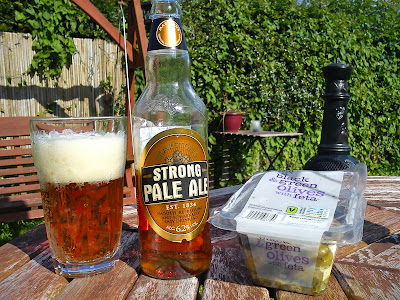 The sudden change in the June weather caught me unawares, what is the point in unpredictable weather? So after the brief delay on the journey home caused by a broken down BMW 3 Series on the bridge (a rare event - I do maintain a hidden record of these things) I made it home in time to bask in the early evening sun, clocked at 19 degrees no less. My chosen accompaniments for the pale glow of the orange globe were warm beer (the best kind and a lost taste in this modern and over chilled world) and multi coloured olives and feta from a plastic pouch. Most of the time it was good, in fact I may well try this little combo again before the sun eventually sets, as it surely must.
Insects of the day: Spotted a few errant wasps here and there, a long wispy web made by an invisible spider and a giant black beetle. 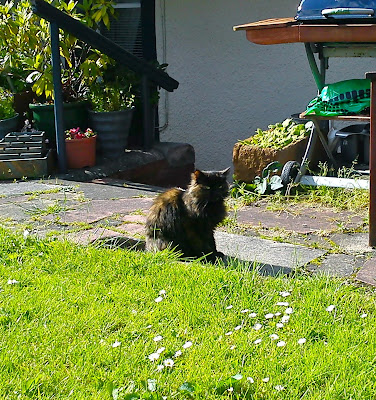 Missie the cat, today she is particularly indifferent towards the Edinburgh £700m tram smash, David Cameron's daily dick-head denials and attention seeking, the fate of the Euro and the Greek economy and Wee Eck's wobble over the great nonsensical Bill to kill or cure sectarianism, whatever that is.
Posted by impossible songs at 6:11 PM
Email ThisBlogThis!Share to TwitterShare to FacebookShare to Pinterest