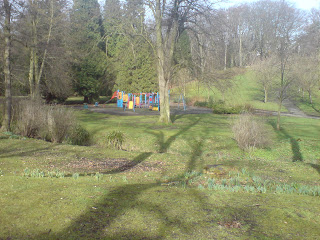 Passing time in Dunfermline while the car undergoes a service which hopefully will be routine and inexpensive. The local Starbucks is my refuge for a few hours, a bright and polished canteen in a half vacant mall that belongs in some other town. Travel agents still full of offers call out to sell two weeks in Turkey or fly-drives in Florida. None of them are attractive or inspiring or busy. The shops open their mouths, hungry for customers who only want to sit this one out munching muffins and grasping cardboard latte cups while the holiday business holds it’s breath and prepares more handwritten discount cards to display in their windows. Meanwhile I need to form holiday plans for the summer.

Muffins aren’t all they are cracked up to be, they give too much on the first bite, no resistance, no fight back, then a sweet taste that turns to dry and then a further aftertaste that milky coffee cant seem to neutralise and all for £4.00, the rough price of a rough fish supper out in the colonies. I know all the prices but I don’t get the values these days. All freshly baked in some barn on an anonymous industrial estate and run over to a common loading dock with all the other supplies in mud spattered white trucks while we all sleep and dream of holidays.

The play park in the picture brought back some memories, I walked past it today on the way to the music shop (string buying). A number of years ago my access to my younger kids was severely restricted due to a marital dispute, not a happy season. When I did see them we often spent time in this playground, glossing over the background troubles and trying to play, chase, hide and seek and be normal for a few minutes in between the collection and the partings. Some lines have been drawn under all that now I’m glad to say but I still choked a little when passing by.

The Glen is full of plaques on trees and benches placed out in the weather in memory of dead relatives. It’s strange how you can envy the dead, considering the step ahead they’ve inadvertently but inevitably taken, no longer trying to fathom life or fighting to hang onto it. Now their place is to be some where but nowhere and the subject of a family conference about the price of a bench and how many appropriate words can be fitted along the top. Trying to make sense of life and find meaning is a life long and generally pointless practice, whilst it demonstrates and tests all the higher aspirations that most people would naturally applaud it also shows a certain lack of consideration for the hard facts and the laws of science and nature which whilst arguably flexible and developing are also, in most cases fixed and time critical. Make the most of the space between the forceps and the stone, don’t ask too many clever but unanswerable questions and don’t waste what you have.

The Scottish Organic pile that is Pittencrief House sits in the middle, a ground floor museum is all that occupies it, the swish and spacious upper floors are closed thanks to the DDA regulations and a stone spiral staircase, a marvellous piece of twisted legislation that helps some and hinders others in the name of equality and against all common sense. The ECC may fund some ugly lift or means of access in 2017 or thereabouts. Meanwhile the building is rendered pointless and a frustrating example of laws that are unworkable in the real world.

I did have a pleasant wander around the rest of the Glen and the Abbey, bright and glistening in the still March sunshine, noting one great and economical gravestone, “Thomson, Tailor, Two Rooms”. Life, occupation and occupancy in stone as some immortal memory and message in four Spartan words. Mine could read “Barclay, Bullshitter, No Room(s)”.

As usual once I’m back in a shopping mall I realise I’ve forgotten all the useful things I need to make the trip worthwhile and useful, the watch that needs the strap and battery, the M&S vouchers that need spending, the phone that needs unblocked, the bent key that needs copied, the measurements for the fence timber - all elsewhere. Maybe that would be a better epitaph: “Barclay, Absent minded, Elsewhere.”

Where does my look come from you ask? How can I get it?
Jumper from Ali (Christmas), jeans from Primark (yes), shoes from New York, pants and socks from Tesco, Umbro T shirt from JJB, combat jacket from Next., HP bag from Amazon. Total cost? No earthly idea or interest. 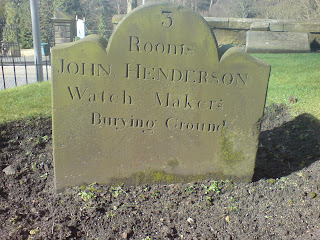 Not the one in the blurb, this guy had 3 rooms.


Posted by impossible songs at 6:26 PM
Email ThisBlogThis!Share to TwitterShare to FacebookShare to Pinterest