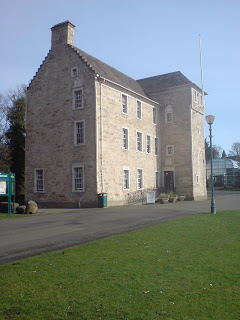 Just back from Birmingham, a bit tired but Bones is on TV as is Grey's Anatomy a little later, bedtime will be late and the progress of our mortal souls into the glorious after life that awaits may be slowed down as a result. As an antidote I must drink copious amounts of apple juice and avoid fatty foods. This is part of Ali's Fuzzy Religion thinking and I'm trusting in it.

The house in the picture is Pittencrieff House, the upper floors are closed thanks to DDA and probably a lack of local funding. I can't imagine the house designer thinking some 300 years ago that access would ever pose a problem. That made me think about today's current crop of modern buildings. I don't believe that many of today's buildings will be around in 300 years either, they'll be stumps, brown earth or at worst slums. If you imagine the future to be a cross between Blade Runner, Star Wars, the Jetsons and Woody Allen's "Sleeper" then our gift to the future will be a deadly mess and getting up and down stairs or into working lifts will be the least of the tomorrow people's problems. I guess that Edinburgh Castle, Holyrood Palace and the New Town will survive but the Parliament will have long rotted away along with vast swathes of housing schemes , IKEA/ASDA sheds and the plastic and concrete flats that have stalled on the Forth waterfront. My descendants will be wearing tin foil clothes, eating protein pills and hovering in their Chinese hover boots all along the remains of those hateful tram tracks that famously brought the city to it's knees and resulted in revolution, a mass exodus to Fife and the colonisation of the great northern wilderness. I also hope that the wolves will have established themselves by this time, picking off the town planning refugees one by one.

Posted by impossible songs at 9:32 PM
Email ThisBlogThis!Share to TwitterShare to FacebookShare to Pinterest