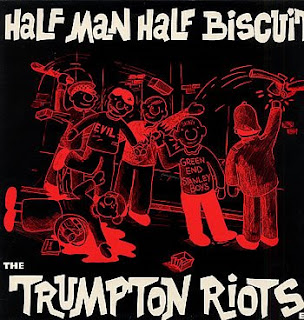 Song of the day: HMHB Trumpton Riots.
Do you ever think of how difficult it is to keep up with films and books and music? How can you stay in touch with what's out there? The easy answer is not to really care and avoid all the pressure or even more easily lie about what you've read/heard/seen and form an opinion based on nothing in particular or a quick gander into Wikipedia.

Of course every so often you feel the need to tell the truth about what your views and actual experiences really are, ahem:

I've never listened to a single Leonard Cohen album in my life.
I've never listened to the Beatles "White Album" but I can't stand it.
I've only ever heard about 20% of Neil Young's work but would consider myself a fan.
I've not seen Trainspotting.
I've read half of a Jack Kerouac book and no William Burroughs.
I've not seen Slumdog Millionaire and don't fancy it much.
I've only listened to "The Rising" by Bruce Springsteen and none of his other stuff.
I've never purchased a Beatles or Rolling Stones record in my life.
I only started listening to the Grateful Dead about two years ago.
I've read one Shakespeare play and about two lines of Burns.
I avoid Coldplay whenever I can.

Now I feel a bit better.

What's up with these people? They walk around at nights in odd shaped groups, over dressed in sports apparel and acting like walking was some special treat, how do they get about normally from A to B? Walking is a normal, everyday activity: couch to TV, TV to fridge, fridge to couch, couch to garage, garage to garden and so on. You don't need a special costume or a set of pals, just move freely in a chosen direction using your feet and legs. Posted by impossible songs at 8:50 PM
Email ThisBlogThis!Share to TwitterShare to FacebookShare to Pinterest