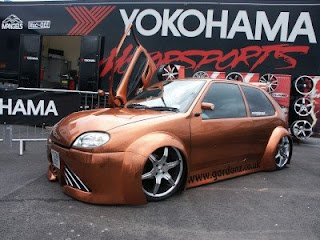 Of course all generalisations are wrong so please forgive me for generalising over chav twats driving stupidly modified Saxos and then littering the roadway as if in some traditional and necessary bad-boy process. The junction by our local MacDonald's by the Forth Road Bridge seems to spawn convoys of these feral litter-bugs, twittering out of the drive-thru onto the main road discarding fast food debris in their wake. I followed once such dullard today and was considering ramming him, luckily my machine guns jammed just as he was in my sights, then he sped away for some other cerebral rendezvous in the nearby Burger King car park no doubt. Thankfully I was headed to Fife where I believe under certain ancient Kingdom laws you can still be birched for looking sideways at Saxos and have a much beloved finger removed for possession of a wide exhaust pipe.

Comic Relief was harrowing and not comic or funny. The clips are of course moving and provocative, the comedy and posturing that surrounds them is mostly banal, predictable and dull, proof that many of our revered comedy geniuses are simply not funny anymore. Shame, at least the cash was raised, what would they get if they were funny?

Yesterday's birthday party in the Play Planet in Dalgety Bay was good fun. My one year old grand daughter being the star of the show, resplendent in a Princess Leia outfit - see Facebook for a visual feast if you're a pal of mine.

Missie the cat gave me an unpleasant surprise this morning as she carried out a series of feline reprisal attacks for being (accidentally) locked in the spare bedroom for 12 hours. Of course I thought she was away catting or mousing or some such but no she was doing what cats do best on the bed and on the sheepskin rug. What joy when I opened the door this morning and she ran out and I surveyed the scene and the smell.
Posted by impossible songs at 7:43 PM
Email ThisBlogThis!Share to TwitterShare to FacebookShare to Pinterest