Life remains a bundle of confusing things fused together by words beginning with con and ending in fuse and the pies just keep rolling by. The latest count between fridge, freezer and hell itself is around seven (approximately). A perfect number, oh! and one half eaten but shown 100% uneaten in the lovely pie-tastic photo above.

Pie ceremonies come and go and our diet tends to be erratic in a famine or feast kind of way punctuated by episodes of Lost, strong drink and random Twitters from Lance Armstrong or H G Wells. The construction of the pie is a de-construction, ultimately. 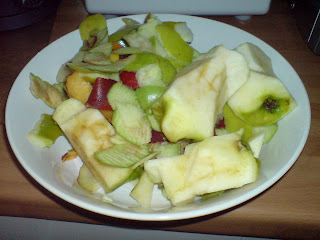 Lovely fresh food prepared with only primates in mind.
Mud on the road

I can't get this lovely plate of chopped and diced fruit to the local chimpanzee colony between here and the 'Ferry due the unusually high mud levels we are experiencing at the moment. The last mud forecast I saw on the Beeb (presented by a young lady in a very low cut blouse, as is the fashion) suggested seasonally normal mud levels would abound. That is not the case, we are all in grave danger of being cut off from the outside world (as some would have it) as roads and bankings and badger burrows collapse mirroring scenes from the Dambusters.

Normal vehicles are rendered useless and all our shoes are in a right state thank you. Don't get me started on the cat's paws either. If you are thinking of coming down here then don't, head for the hills and that way you'll get here anyway by late Spring. The good news is that we should safely make it through to April on pie stocks alone but as for those wayward and pesky chimps, they'll stay hungry and cheeky. When in West Lothian it pays to look up.
Posted by impossible songs at 6:02 PM
Email ThisBlogThis!Share to TwitterShare to FacebookShare to Pinterest