Jamie Oliver had a word for it 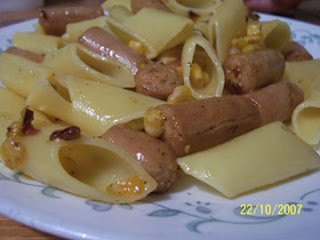 There is no pasta recipe that isn't improved by adding in hot dogs - we've all heard that one before.

Back to back episodes of Lost. Things on that island just aren't right, where will the time bandits crash next and how come the physics displayed are counter to Dr Emmet's Back to the Future basics? Talk about being lost.

Spiders in the shower that cannot be dislodged.

A road gritting spree that proves futile as floods return.

A cat that refuses to move despite veiled threats, pressure and some gentle heaving. Then it snores loudly.

I'd have an early night if I could accurately ascertain the actual time but then I'm lost as is, some may say, my mortal soul. Not sure about my immortal soul but I think the ability to express emotion is the indication of the presence of a soul of whatever type.

Pavement cracks that threaten to talk back.
Posted by impossible songs at 7:44 PM
Email ThisBlogThis!Share to TwitterShare to FacebookShare to Pinterest