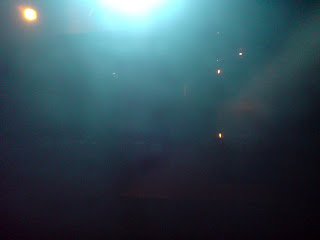 Daily detail of the soft, dark underbelly of the city formerly known as Edinburgh.
My City in ruins
Last night I had the pleasure of driving across Edinburgh after dark. It is at this time that the cones come out, the flashing lights flash and organised confusion reigns in a blitzkrieg of roadworks, barriers and uneven and hostile surfaces. Motorists and pedestrians alike are corralled or herded across great swathes of construction sites all for the greater good of a mass transit system known as the tram. I may regret saying this but at the moment it all seems like a complete mess heading for a full-on collision with a bad idea.

Once the late night shopping traffic had been negotiated we headed for the R&A or A&R or A&E (a big, curious building anyway) to view an art exhibition. The overall effect of the show was "underwhelming" though some good pieces were on display and one or two were quite provocative. I find that at these public events the people attending are often more interesting than the exhibits:

The old hands, the teachers in big cardigans with unkempt hair, strange glasses frames and battered loafing shoes, chewing and mulling over and wondering where it went wrong for them, hoping for a free moment to dive out for a quick cigarette.

The patrons and helpers anxious to spread the wine of hospitality and good spirit and hoping for the best for sales and attendance, higher profiles and footfall. They hold out glossy pamphlets and flyers and smile at everyone, because every one is important after all.

The cynics and hacks who've seen it all before and have lost the eye to see fresh talent but are stuck with going through the motions though they don't know why. They focus in on a few key pieces, standing guard and allowing the exhibit to crown them with wisdom by association and osmosis.

Proud parents who wanted a doctor or a lawyer in the family who now have an artist who'll swallow their assets like a hungry pac-man and squander their right to a peaceful old age with the highs of critical success and the depths of no-sales despair. Their child's art now invades their dreams of restful cruises and caravan weekends. They now feel the impact of some twisted revenge knowing their concrete-willed offspring will feel too strongly about nebulous and unresolvable social and moral issues to ever produce the grandchild they wish for. 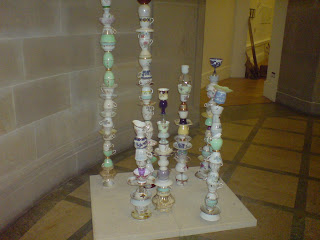 A veritable vertical tableaux of family wedding china, famous throughout Fife and the North East. An un-buried treasure and true piece of Scottish working class history expressed as a fragile city of porcelain and bone, telling of the desperation to have and display some meaningful possessions, irrespective of anything else .
Posted by impossible songs at 2:31 PM
Email ThisBlogThis!Share to TwitterShare to FacebookShare to Pinterest