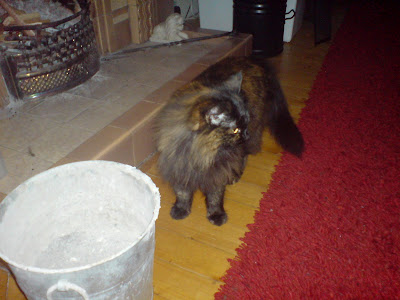 Missie leaves the safety of couch-land to check out the fire bucket.

Last night's tea was really the remains of Saturday's tea - redux, a cosmopolitan mix of leftovers with an emphasis on fish based products and potatoes. A passing wag with a jaunty quiff (we get a lot of them here in the Bohemian sticks) described it as an "Irish Prison Breakfast". No it wasn't the classic fish-finger sandwich or two fried eggs on a roll either, much more sophisticated, in fact you could have eaten it with a fork. The cats ignored it anyway and we slept away the rest of the evening right up until the start of Lost.

In a flurry of multi-coloured daydreams I came up with the hair brained idea of taking Mr Cougar (and various family members) on an expedition to the Arctic Circle, mostly via the North Sea and Norway. Two snags reared up to bite right away: the first being information given on the Big Mac Index for Norway and the second being a maximum speed limit of 59 mph all across the country, they are both a hard burden to live with and something of a hindrance to a 2000 mile road trip. Time to think again but not about elk collisions, lager, heavy metal and ice hotels, perhaps Canada would be a better place to avoid the curse of the Krone and Euro, I must research the possibilities and then decide between France again or a West Highland wigwam.

The cats are settling in mainly by accidentally avoiding one another, that will work well. 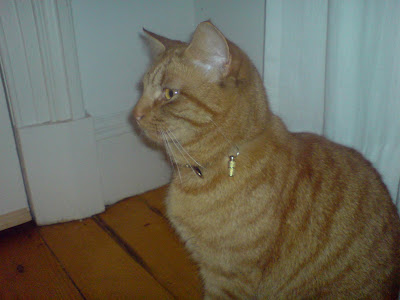 Clint remains alert, aloof and a little alone wondering if that new cat could be a relative of some kind.
Posted by impossible songs at 7:21 PM
Email ThisBlogThis!Share to TwitterShare to FacebookShare to Pinterest