Shackleton had a word for it 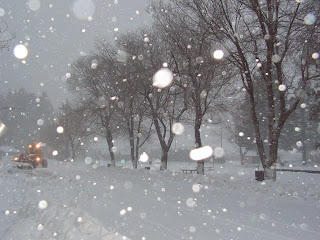 Snow brings hysteria and peace in equal measure, a bit like alcohol or being in love. Once steady and reliable shoes are suddenly slippy and hated, ears fail to listen as they glow red, fingers fail to grip bags and phones and dropping cold spirals of frozen water crystals are allegedly all unique but you can never see them properly without your specs.

The news bulletins cover snow as if it came in a bomb from Russia, out to destroy capitalism, public transport and the British way of life and everybody must not travel unless essential. What the hell does that mean? What's optional travel anyway?

They could put Lord Peter Mandelson in charge of giving snow clearance advice, give him a brush and shovel and send him mincing down to some oil refinery to tell the protesters that they shouldn't have traveled out in such awful weather because it's much more reasonable to let those foreign chaps do the travelling.

Driving in snow is the worst, for one thing you always get stuck behind some joker who wants to drive exactly five miles an hour slower than your car can manage in a decent gear. You don't want to run into him but you're fed up changing gear and if he drops his speed you might start to stick. Worst of all if you try to overtake (and that involves heading out into the less clear and well gritted lane and getting splattered) you look like a complete maniac. Possible duvet day alert coming up.

Want a laugh? Click here. Thanks to P. It's not a link to the £50million appeal for funds for the forgettable but "lovable" Titian, why don't they do BOGOF at art gallery sales? Just what the Scottish economy needs right now.
Posted by impossible songs at 10:03 PM
Email ThisBlogThis!Share to TwitterShare to FacebookShare to Pinterest