Schroeder had a word for it 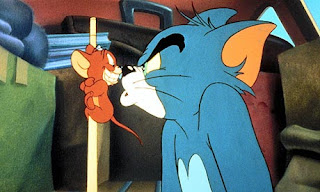 Once we'd consumed the trout last night we resorted to couch life in order to avoid the bad weather that never came. Instead sleep came only to be dramatically ended by what seemed like a cat suspended above the bed screaming and fighting with another invisible cat, Ninja style. The stramash (as Arthur Momford would have said, also a 60s pop show fronted by Lulu as I recall) lasted no time at all but left Ali and I wide awake and shocked and Clint hiding under the bed.

Forensic investigation revealed that a cat of unknown origin had entered the house via the conveniently open cat flap, scooped up the remaining cat food and explored upstairs until he she or it encountered Clint, the stalwart and brave ginger cat. I believe that in true cartoon apple pie fashion this wild cat sniffed the trout on the frosty night breeze and decided to call in for a possible feast. At 2.30 in the morning this isn't a good test of quantum physics, nerves or levels of consciousness. No trout for a while I think.
Posted by impossible songs at 6:27 PM
Email ThisBlogThis!Share to TwitterShare to FacebookShare to Pinterest