Jeremy Clarkson had a word for it 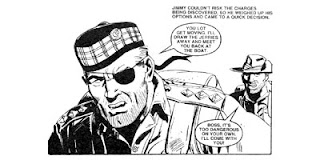 On behalf of all the one-eyed Scottish idiots I know (including myself - I'm assuming here that the one-eye is in fact the "Jap's eye" kind of one-eye) I'd like to thank JC for getting us back up into the headlines along with Carol Thatcher, Golliwogs, teddy bears and boys and Robertson's jam - the ex-jewel of Dundee. As for Father Gee Broom he's not an idiot, after all he is the PM and as such demands a little more respect, or maybe not as he's from Kirkcaldy. At least freedom of speech is being raised as an issue, the trouble being that no-one has anything remotely sensible to say about it or would know quite what to do with it if they did have it.

Meanwhile back in Scotland, the main cause of all of England's problems for the last 1000 years (apart from the French and the Germans) bigotry and ignorance reign as we reserve the right to dislike and suspect everyone from our nearest neighbours to those out there at the ends of the colonial empire. A balanced and consistent point of view in my humble opinion and one that has led us to having one of the finest banking systems in the world, though maybe not quite a sustainable one.

As an example I am referring to the letter I received today from the trustees at the TSB telling me they'll charge me £15 a day as well £15.99 as a standing fine for bouncing a cheque for about the same piddling amount a few days ago. Well bugger, I thought that some one-trick idiot Fifer had bought up this bank so that the likes of me could share in it's ownership and rescue the free world from Hell's spinning pit of financial gloom and doom. Apparently not, so I must continue to embrace the uncertainty and believe in the BBC and pay up.
Posted by impossible songs at 1:23 PM
Email ThisBlogThis!Share to TwitterShare to FacebookShare to Pinterest