David Reilly had a word for it 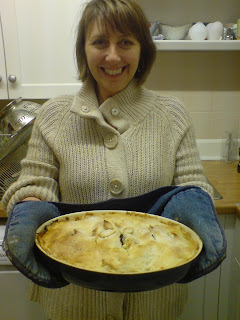 Golden goodness pours from the heart of our farmhouse kitchen.
The entrepreneurs behind Cloudland Blue Enterprises seem to enjoy food, dietary and kitchen based blogging material which is all perfectly understandable. In order to satisfy demand I thought the above Ali + pie picture deserved a blogging outing (though it has appeared on the rival channel known as Facebook). This was taken a few weeks ago during one of our impromptu and unscheduled pie preparation evenings. Bored with no Jonathan Ross, Stramash or Stingray on the telly, Ali set about doing some apple pie creation (in fact there were two) and these magnificent fruit pies fed us and various passers-by for at least a week.

No new wild cat burglary to report last night, no strange noises or midnight disasters, just some forward planning and inward reflection, one eye on the dropping thermometer and another of the glowing coals. Quite a painful Yoga position actually, you may not wish to try it.
Posted by impossible songs at 3:06 PM
Email ThisBlogThis!Share to TwitterShare to FacebookShare to Pinterest