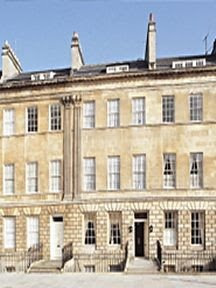 Great Pultney Street, a former home at No 26.
So I came back, from outer space to find you here with that puzzled look upon your face I should've developed ... a better way of seeing perhaps. I was in Bath breakfasting in a snooty hotel, eating pineapples finely sliced accompanied by a blob of yogurt. I was sitting alone and the waitress put down the coffee pot and milk, white and silver against the red tablecloth. The coffee pot, metal finished and angular sat like the Chrysler Building amongst the lowly crockery and condiments. A merry go round of jam and marmalade played at a safe distance and the round toast cracked in a shiny rack. It all looked so nice and was accidentally composed so well it was a shame to pick up or disturb anything, but I did eventually. I skipped the cooked offerings however and allowed simplicity, cold fruit and warm toast to set me up for the rest of the day.

It's about 25 years since I stayed in Bath, it was when I was at college for a short while, the Bath Stone buildings don't change but the traffic has gone from being bad to being in constant grid lock. Recycling efforts take the curious form of Waitrose bags filled with bottles and tat being hung from black iron railings like offerings to crow-gods or pirates. Eventually some truck with flashing amber eyes will pick them from their hangers like an over ripe and dirty harvest of fruit.

As I strolled around (not having been there for about five years) I became the anxious recorder and chronicler of change. What pubs had shut, or changed into bistros or cafes? No too many though they seemed quieter and more subdued, no smoke, fewer people and less laughter but a decent steak for £7.00 in the Huntsman in Orange Grove. High living indeed.

Thinking of how things are seen and recorded and catalogued, whether in the mind or physically by some system reminded me of points made in "The Delirious Museum", a book written a couple of years ago by an old friend, Calum Storrie. His dry eye for detail and the ironic juxtapositioning of world wide exhibitions and collections are well worth a scan. 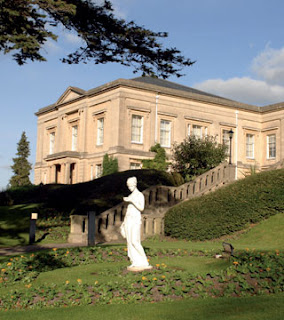 Hotel with extensive gardens, ungritted roads and a strange smell of chips in the ground floor corriders or so I thought. Bath Spa by MacDonalds.
Posted by impossible songs at 2:29 PM
Email ThisBlogThis!Share to TwitterShare to FacebookShare to Pinterest