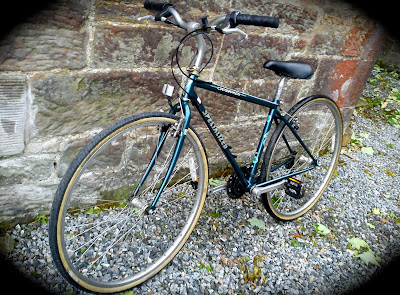 You can tell summer is somewhere nearby, the air is strangely moist and the wind is strangely strong and a young man's mind turns to cycling and other two-wheeled type of endeavours - but I had no bike. That was yesterday of course, today I have a bike and I am officially a cyclist again thanks to exploring Gumtree's huge selection of keenly priced, used bicycles and after a few phone calls, ta-da! buying one. So I'm already planning a brief circuit of Loch Lomond, an excursion to the weekend horsey event at Hopetoun and a jaunt to John O'Groats via the May Island. I'm not planning on falling from it, getting soaked in rain showers, bumping into potholes or going up hills, ever. 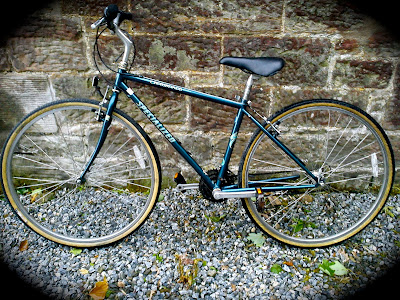 Funny how in some photos bike wheels can look less than round, in fact they can look crooked and quite uncircular and unwheel-like. It is an optical illusion brought about by a dodgy lens, bad light and unsteady hands.
Posted by impossible songs at 8:18 PM
Email ThisBlogThis!Share to TwitterShare to FacebookShare to Pinterest