On a more serious note 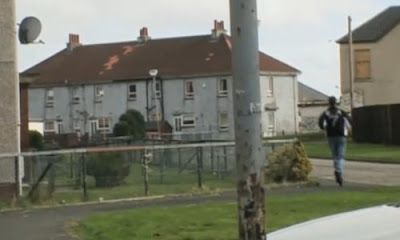 The Scheme: I’ve avoided this BBC TV show for a while (one of many I purposely stay away from) but I accidently saw some of it last night. A sad and disturbing programme that chronicles the trials, tribulations, despair, stupidity and occasional warmth to be found in “typical” Scottish housing scheme. The turgid and repetitive misery must rankle politicians and do gooders in general as the drug abuse, petty crime and circle of squalor and meaningless behaviour is displayed and negotiated. It’s not a great advertisement for the habitual wearers of Glasgow Rangers football tops either. The message is clear; there is no way out and though they are certainly in need of some it’s hard to summon up sympathy for the real life characters all of whom comply nicely with the middle-class view of schemey stereotypes. I can imagine the smug but guilty feeling voyeuristic viewers sweating over the desperate antics of these victims, wondering were on earth our society is going and what is the point of having any aspirations in a place where socially mobility is actively seen to be running in reverse. The cast last night were both desolate and formidable in a way that makes you want to punch your own head and then the head of any nearby politician:

The gangly, inarticulate junkie who’s in a spiral of dependency, who will look forty-nine on his twenty-fourth birthday and who will be dead before he’s twenty-five.

The teenage trouble maker whom social services try to train and educate but who, despite support and cajoling falls back into robbery and violence when he’s bored or disaffected, which is mostly all the time.

The long suffering mother, robbed and abused by her feral offspring but with no option other than grow older and weaker defending the indefensible.

The teenage mum daubed with cheap make up and bruises, abandoned by her child’s feckless father who tries to build a home and find some meaning. Her clueless and dependant approach to life forever supported by a weak system that will relentlessly churn out another lost generation that will in turn make all the same mistakes.

The rough and evangelical carers, trying to build a community with real teeth on the dead gums of a rotting estate. They struggle to milk funds from a frustrated and broken system only to be forever beaten back by bureaucracy, cost hurdles and the apathy and pithy disregard of their own peers.

A well meaning, careworn gardener creating an oasis of expensive floral colour within the rubble, beaten down grass, strewn litter and graffiti who gets only a second prize (presumably for pluck and persistence) year in year out in the local gardening competition. His appreciative wife looks on and shrugs as he is crushed and denied the glory of a deserved victory.

Watching this a few weeks after the SNP victory and the jingoism and bluster that followed I can’t but worry about the soft underbelly of Scotland and the fatal flaws we all know lurk on the edges of our national psyche. Even the most deluded optimist can see that the difference between this version of a civilised pocket of Scotland and any given Third World shanty town is measured in single figure millimetres. There is a big job to do out there and Cameron’s Big Society doesn’t look tough enough to tackle it just yet.

Posted by impossible songs at 7:13 PM
Email ThisBlogThis!Share to TwitterShare to FacebookShare to Pinterest